Montmartre is definitely one of the reasons why you fall in love with Paris. Its narrow alleys, secret passageways, centuries-old house, windmills, street artists, bohemian architecture will truly make your walk a one-of-a-kind experience.

Perched on the top of a small hill in the 18th arrondissement, the most famous Parisian district has kept the same village atmosphere that inspired so much the artists of the 19th and 20th centuries such as Vincent Van Gogh and Pablo Picasso.

For a long time, Montmartre was in conflict with Paris and separated from it; it was annexed to the capital only in 1860, at the time of the Haussmannian urbanization. That’s why it still retains its charming village characteristics and its 18th century style.

A nice tip? Watch the movie Le Fabuleux Destin d’Amélie Poulain before your Montmartre tour, you will enjoy your visit a million times more!

Following Amélie’s steps you will see the filming locations play out in real life: in particular, the Café Deux Moulins, a typical Parisian café where Amélie works.

But let’s start our unforgettable and inspiring walk, making sure we cover all the MUST SEE and MUST GO places…. and don’t forget to wear comfortable shoes!

The Basilica of Sacre-Coeur

The Sacré-Coeur (Sacred Heart) basilica is the most emblematic attraction of Montmartre and one of the most iconic monuments in Paris.

At the top of the hill, it offers a breathtaking panoramic view of the capital, from 130 metres above ground. In a Roman-Byzantine style, the Sacré-Coeur is a stunning white monument that began construction in the late 19th century, with the goal of being visible from all over Paris. 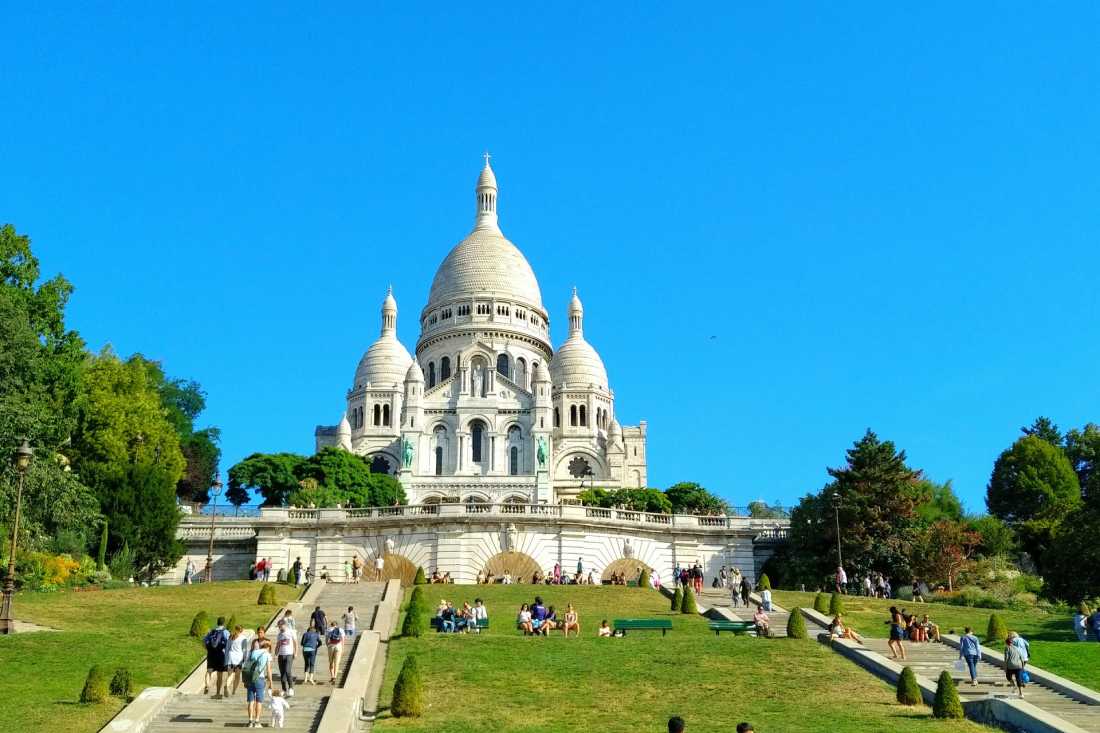 The Sacré-Coeur basilica is the most emblematic attraction of Montmartre. Photo: Jerome Clarysse from Pixabay

The stones used for the construction came from Château-Landon and produce a white substance – calcin – whenever it is raining. As a consequence, the Basilica remains white despite the pollution.

Inside the building, the ceiling is decorated with the largest mosaic in France.

Our best recommendation to get to the church is to walk uphill, to better enjoy some of the nice landmarks along the way.

But if you are too tired and can’t cope with steep streets or long flights of steps, you have two options (either of which will cost you one Métro ticket):

A short walk from Sacré-Coeur, this picturesque stone-paved square is an open-air art gallery effusing the creative spirit of Montmartre.

Here you can see artists still at work, have your painting (or caricature!) done or enjoy lunch on a terrace overlooking the square. 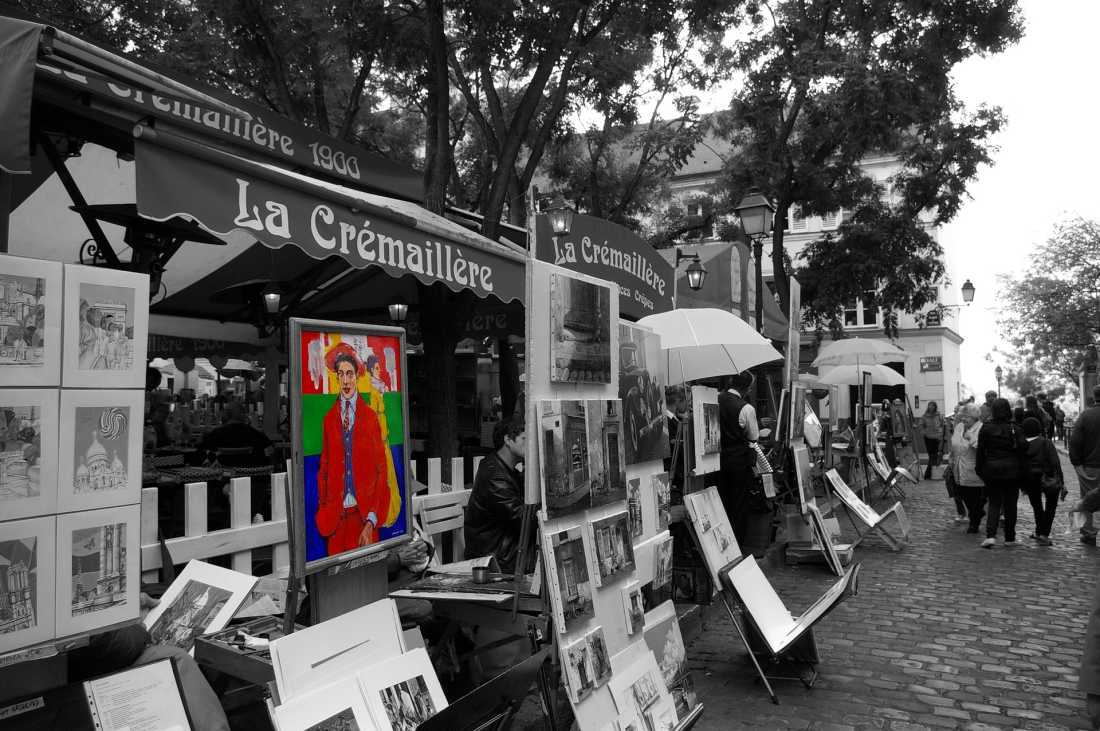 For sure it’s very touristy, but it’s also very charming and somehow seems to retain an air of authenticity despite the crowds.

Discover the Bohemian past of Montmartre at this wonderful museum a few steps away from the Place du Tertre.

Situated at number 12 Rue Cortot, the museum was formerly a residence and meeting place for prominent artists such as Renoir, Bernard, and Valadon.

The eclectic collection of art dating back to the 1880s symbolizes the charming architecture that surrounds the whole city. In particular, a glimpse of what the district would have been like when it was filled with farms and windmills.

Surrounding the museum are the Renoir Gardens where the artist painted La Balancoire (The Swing) and Jardin de la rue Cortot. The gardens offer sensational views of Montmartre and the rest of Paris.

Want to get a real taste of Provence? Just behind the Musée de Montmartre, you will see Le Clos Montmartre, one of the prettiest vineyards in Paris.

Sadly Le Clos Montmartre is actually closed to the public, with the exception of the annual five-day grape harvest festival, La Fête des Vendanges. On this occasion, the vineyard is open through guided tour only.

It’s hard to imagine, but the vineyard actually still produces a few hundred bottles of wine which go to auction during the festival. Profits go towards funding projects in the 18e arrondissement.

During the rest of the year however, you can still wander around its exterior and admire the vines from outside the metal railings.

The Place des Abbesses is a lively square featuring the prettiest Métro station in Paris, with a decorative Art Nouveau entrance designed by Victor Guimard.

It’s here that you will find one of the most romantic expressions of love: Le Mur des Je t’aime.

This fun art installation is basically a wall on which the words “I love you” are written in more than 300 different languages.

A favorite among instagrammers and couples in love!

The Saint-Pierre Market is a true institution on the Parisian landscape: a multi-level store in which you can choose among thousands of fabrics, patterns, materials or trimming.

If you are a designer, a home decorator or simply curious, you must visit this incredible place. The store carries every type of fabric imaginable and holds an office for cutting and ordering on every floor.

Literally a paradise for seamstresses and anyone riding the “DYI” trend.

Visitors often miss this spot. But as the third largest graveyard in Paris (more than 11 hectars!), with beautiful graves from a variety of different funerary art styles, it’s worth a visit if you’re looking for a peaceful and quiet escape.

The Montmartre Cemetery was built in an abandoned quarry; since the quarry was basically a huge hole in the ground, the cemetery is below street level, which gives it that unique perspective.

Among the tombs are those of many of the artists who lived in Montmartre during its golden years (Alexandre Dumas, Foucault, Emile Zola, Dalida, Degas…)

Also, this cemetery is home to its own little community: a large group of cats wandering among tombs, memorial and beautiful sculptures.

The only entrance to the cemetery is 20 avenue Rachel. Not too easy to find, it is down the stairs just after the bridge, on the Place de Clichy side.

Once upon a time, the hills surrounding Paris were filled with farmland and windmills.

Especially in Montmartre, there were dozens of estimated windmills of which only two remain today: the Moulin Blute-Fin and Moulin Radet, which date back to 1717. Together, these two windmills are known as the Moulin de la Galette, who inspired many painters including Renoir and Van Gogh.

You can really spot Moulin de la Galette only in the winter, when the leaves fall off the trees; if you want a cool photo though, you can head to Rue Lepic.

An evening at the Moulin Rouge is truly unforgettable!

Situated at the foot of the vibrant Montmartre district (on the corner of boulevard de Clichy and place Blanche), this world famous cabaret venue scandalised Paris with the birth of the can-can dance, still performed today. 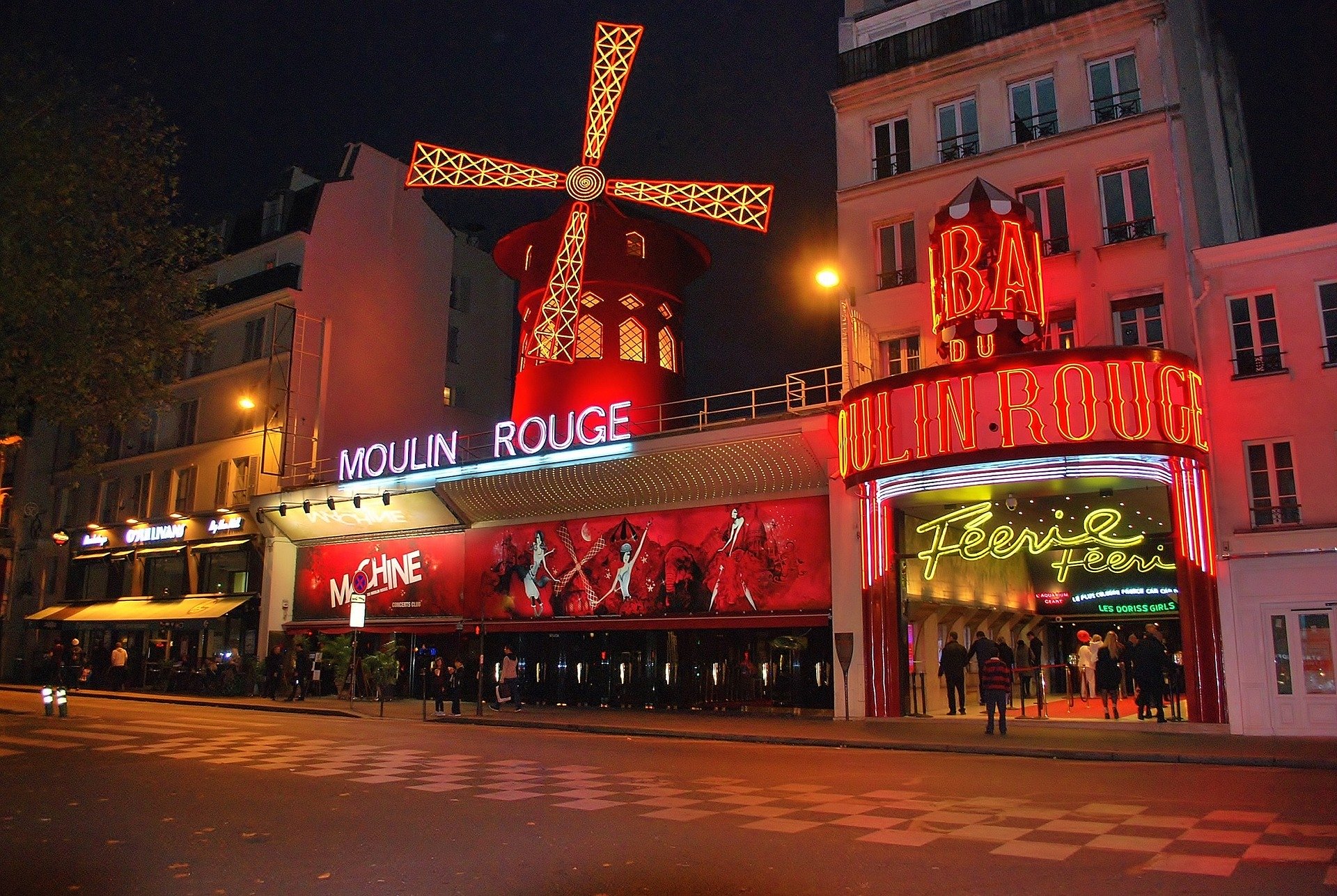 The Moulin Rouge, the most famous cabaret in the world

Explosive and colourful shows are performed by beautiful women dancing with whirls of feather, boas, sparkles and sequins, and ruffling their dresses between a series of high kicks, splits and cartwheels.

But while this is perhaps the most famous aspect, there’s a lot more to a Moulin Rouge show: you can see talented acrobats, magicians and even exotic animals performing!

And even after more than 100 years, it’s nearly always full.

The legendary cabaret was inaugurated in 1899 (the same year as the Eiffel Tower), and was actually the first electric building in Paris. During the extravagant Belle Époque, the bright red windmill of the Moulin Rouge became symbolic of Paris’ Red Light District. Following a devastating fire in 1915, the Moulin Rouge closed for 6 years and opened again in 1921, just after the end of WWI.

Despite the reconstruction, the cabaret still preserves the same decadence atmosphere and flashy lights as before: an architecture that inspired and keeps inspiring many other cabarets all around the world, from many cities in Europe to Las Vegas.

Where to sleep in Montmartre

Tucked in a secret passageway of picturesque Montmartre, off Avenue Junot, this ultra-exclusive boutique hotel offers a unique proposition: : five suites from 35 to 85 square meters that were all uniquely designed in locksteps with numerous visual artists, and that all come with divine views of the 900m2 wild garden landscaped by Louis Benech.

Built in the 19th century, it was the residence of several noble families including the Hermès family. In 2007, Morgane Rousseau turned it into a boutique hotel.

Where to eat in Montmartre

If you walk past boulevard Clichy in the evening, just across the street from Pigalle station, you will see a long line of people queuing up on the sidewalk, waiting to enter the very trendy and delicious restaurant Bouillon Pigalle.

Very much in vogue at the Belle Epoque in the 19th century, the “bouillons” were big, popular and inexpensive workers’ restaurants with shared tables and convivial atmosphere.

The long line of red banquette (paired with white tablecloths) and efficient waiters all dressed in black offer an air of vieux Paris, undeniably charming and elegant.

Marcel, now with three branches across the city, is a prime example of the Paris brunch phenomenon.

It combines the cool and industrial setting typical of New York style with a warm and friendly service – even if you have to be patient before sitting during peak hours.

The place offers a delicious and clearly freshly prepared a la carte brunch, with favorites like Eggs Benedict, French toast, or pancakes… and unlike many brunch places, everything is made-to-order.

Menu: 38 euros for lunch – from Tuesday to Saturday – with entry and plate or plate and dessert.

This small and quiet 14-seater dining room celebrates the marriage between Japanese and French cuisine.

There’s no a la carte menu here. Instead, they only serve multicourse, blind tasting menus, although they respect food phobias and allergies. Good value for the money, and open for both lunch and dinner on Saturdays, too.

Le Réciproque borns from an idea of two youthful partners, Sylvain Gaudon et Adrien Eggenschwiler: one is in the kitchen where he excels at cooking traditional and flavoursome recipes, while the other is in charge of the friendly, courteous service.

The famous coffee shop of Melbourne has now opened its doors also in front of Sacré Coeur.

Take a stop for breakfast or brunch: you will find creative food, a charming interior, beautiful colorful plates and cups and really good coffee.

Ideal for a quick lunch, this place (little sister of Jeanne A) offers classic French dishes with a modern twist. The meats, carefully chosen and cooked to perfection, are a definite highlight.

Jeanne B is also an epicerie.

More designed for tourists than for the average Parisian, what pays off here is its nice and big terrace with a beautiful view of the city.

Ideal for a coffee or rosé wine on a sunny afternoon.

Open every day from 8am to 1am.

Perched on the 7th floor of Terrass’’ Hotel, there is this panoramic terrace with an amazing view on Paris and its famous sights.

Up there you’ll find an indoor bar restaurant, plus an outdoor bar with swings and baby-foot soccer to chill all day and late into the night.

It’s all about poultry at Le Coq Rico. 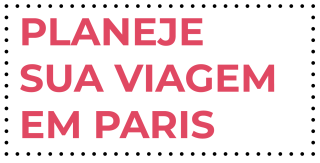